Editor’s Note: The following obituary was penned by Karl Freienmuth, AK6SP, Bill’s son; the Antietam Radio Association sends all of our combined sympathies to him and his loved ones – please allow Bill’s story help to inspire you to achieve greatness

Bill Freienmuth, W3OIO, passed away on October 10, 2021 at the age of 101. Born in August of 1920, Bill became interested in the technical aspects of radio while in grade school and began a correspondence course in radio and television while in high school. He built a crystal set and heard news of the Will Rodgers and Wylie Post crash in Alaska when he first powered it up. That was August 15th of 1935 – Bill’s fifteenth birthday.

One of our life members, Page Pyne, passed away on September 26, 2021. He will be greatly missed. He was a great mentor to many, and always a friend. You may read his obituary here

We may have been a little light on hamfests this year, but the number of radios that have been circulating between us seems to be steady…

Our Secretary, K3WJC, was contacted by a gentleman who would like to sell his recently purchased, lightly used rig; Bill is acting as the go between for now. Up for grabs is a Yaesu FT897D, for which the owner is asking $800. As far as condition, pictures are below. If you are interested, please contact K3WJC (Bill Collins) @ colli020@gmail.com; you may also call his cell (304-676-9391), but please be aware that you will most likely get voice mail. Read more for images.

Roland Anders, K3RA, is starting up a Technician Class for those new hams who would rather join a class than to self-study. This class will be on Zoom. This is not an Antietam Radio class, but we fully support his efforts, and are posting his class to better the entire ham community.

... let's everyone strive to make it a success!

Thanks to Covid-19, the entire world faced a devastating 2020 – it seemed that the entire world was put on a major pause. The year 2021 shows that people seem to have a little more confidence to step outside, now that the health and government officials have had a chance to get vaccines and other safeguards in place.

Herman Niedzielski (K2AVA), ARA VP, recently received approval from the Lietersburg Ruritan to have a booth at the 2021 Annual Peach Festival this coming weekend, August 14th and 15th; 9AM to 5PM.

We plan on operating 20, 40, and 80 meters on phone, or CW on any band. As is customary, you will keep a log of your contacts to aid in fulfilling the QSL requests. Operate from your home QTH! 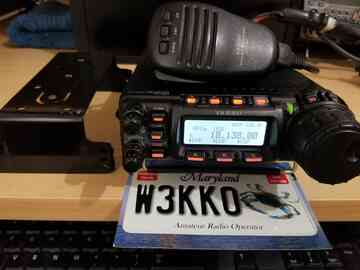 This is ARA member Garry Laing – I am serving as Net Control for the 2021 Fort Ritchie Triathlon. I am looking for a few volunteers to help with communications support during the biking portion of the event. The race is Sunday, August 1, starting at approximately 7:30 am.

BRING YOUR HT to FD and setup!!